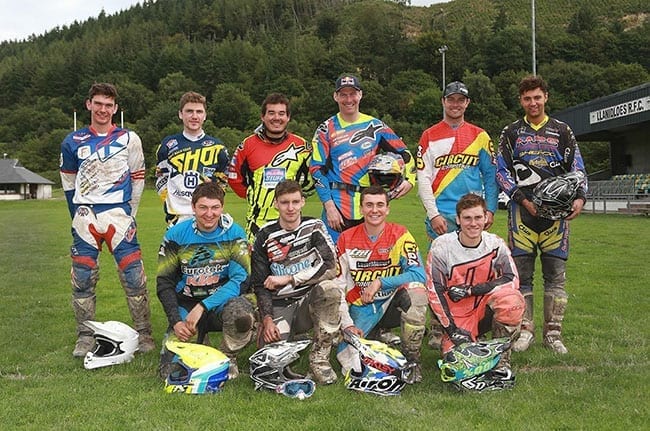 With just a few days left before the ten strong ACU British ISDE team fly out to Kosice,
Slovakia to begin preparations for the International Six Days Enduro which begins on
September 7th, here is a brief look at the final line-up of determined riders keen to make an impact on this prestigious and legendary event.

This year the team is made up of an experienced and proven Trophy class and a youthful and enthusiastic Junior class.

While in the Juniors  James Dent,  Josh Gotts,  Rob Johnson and Lee Sealey are the ones chosen.

Enduro win in 2005, also in Slovakia. The world renowned rider will be hoping for a good

result for all the team, but will also be aiming for the outright E2 class victory.

Fellow Manxman Jamie McCanney will hope to be on top form after an impressive season in the World Enduro Championship which sees him leading the championship in the EJ class.

their time in the forests of Northern Europe in the 2015 European Enduro Championship will stand them in good stead heading into Slovakia’s wild countryside.

Jack Rowland returns to International Enduro after a short hiatus and despite being just 22 years old the Yorkshireman has already enjoyed podium success three times with Team GB in past Six Days events.

Joe Wootton is taking the big step straight into the Trophy team but the 20 year old Welsh rider is currently performing well in the European championship and won’t be phazed by the task at hand.

excited about the prospect of representing his country on the world stage:

“I have such a passion for enduro and since I first sat on a bike it became a goal of mine to ride in the ISDE. I’m absolutely stoked.”

Josh’s pride and enthusiasm was echoed by fellow Junior rider, Lee Sealey:”To be picked for the GB Junior is a dream come true.

We have a good team and I believe we can put in a strong performance.”Gotts and Sealey will be joined by James Dent and Rob Johnson, both of whom have experience at International level.

Next week the entire team will travel to Slovakia to begin walking the tests and readythemselves for the challenge ahead.