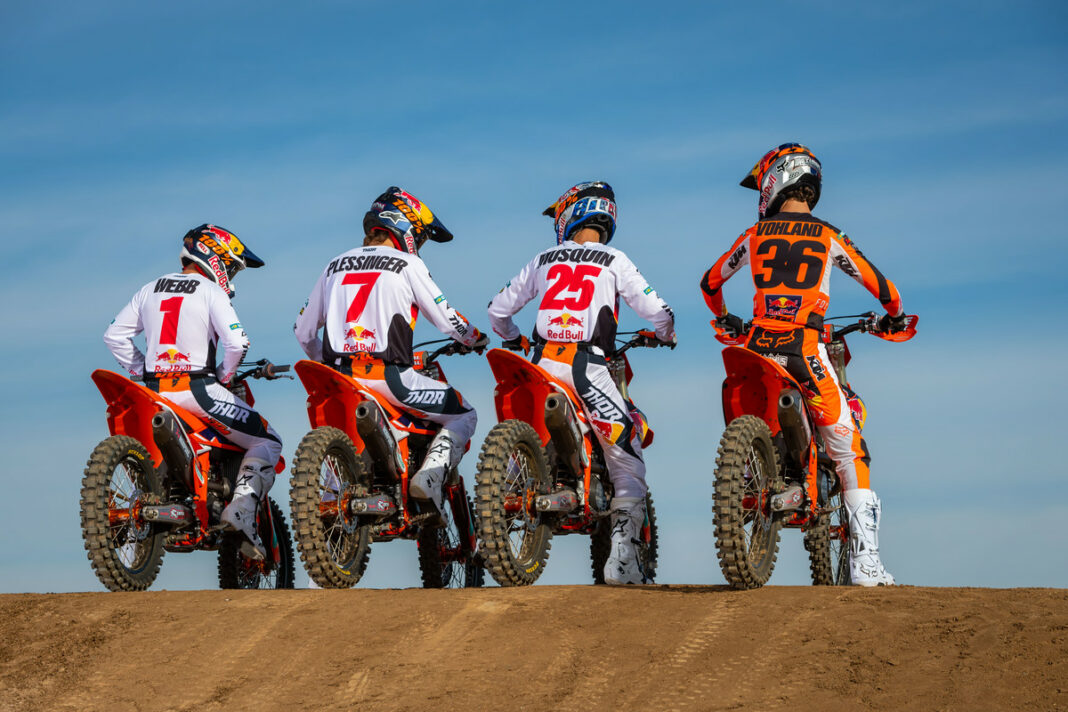 Red Bull KTM have released their factory team, for 2022 consisting of a new addition with Aaron Plessinger joining the team alongside long standing KTM riders.

Webb, the reigning 450SX Champion, will proudly display the #1 plate aboard his new bike as he sets out to defend his title for the second time. The 26-year-old had an exceptional supercross season in 2021, sweeping half of the Main Events for a total of eight victories. He followed this up with a consistent performance in the AMA Pro Motocross Championship, finishing fourth overall, and now his focus is set on bringing home back-to-back titles in supercross.

“I’m really excited for the upcoming series. It’ll be great defending the number one plate again, we worked hard last year to get the championship,” said Webb.

“We have a brand new bike this year and that is great. We’ve also been having fun with the new team dynamic and having Aaron [Plessinger] on the team. I’ve been teammates with him before, so it’s been great to reunite and have a three-man team on the 450, with Max on the 250. I’m looking forward to it.”

Returning for his 12th season with Red Bull KTM Factory Racing, Musquin will be among Webb’s toughest competitors as the French rider looks to earn a title of his own with a supercross-only focus in 2022.

Musquin had his fair share of battles coming back from injury last season, but he managed to finish strong with 1-2 results at the final two rounds. Following his dominating performance at the Paris Supercross in November, the Frenchman will look to build upon strong momentum when the gate drops in the U.S. in January.

“It’s always exciting to go for a new season, especially this year with a new bike,” said Musquin. “It is something that I was looking forward to – we have made progress and we’re still learning to be even better, so it’s super exciting.

“We are going into my 12th year with Red Bull KTM here in America. It’s very special and I’m always super honoured to be a part of the Red Bull KTM family and to go for one more year and achieve great things. It’s going to be a very strong team for this new season!”

Joining Webb and Musquin on-track for the first time is Red Bull KTM newcomer, Aaron Plessinger, aboard the #7 machine. Like his teammates, Plessinger has been hard at work in his pre-season training in high anticipation for his debut with the team at Anaheim.

Claiming his first 450 podium at the 2021 Daytona SX, Plessinger delivered consistent results all season to lock in a top-five in the championship standings and the 25-year-old now has his sights set on podium contention in 2022.

“It’s an amazing accomplishment for me to have joined the Red Bull KTM Factory Racing team,” said Plessinger. “My dad used to race for KTM in GNCC, and won a couple of championships, so it’s pretty special for me to get to be a part of this team.

“My goal is to get as many race-wins as I can and try to win these guys some more championships. My time is due and I feel like this year is going to be a really good year with two great teammates – Cooper and Marvin – I think we can really do some damage out there.

“The new bike is awesome. I love this thing. It’s so nimble and light, I can put it where I want it and the suspension works great on it. I think it’s going to be a really good year and I’m looking forward to it.”

Maximus Vohland continues with the Red Bull KTM Factory Racing team for his second season in the 250SX division. The 18-year-old missed the majority of his rookie Supercross season due to an injury sustained early on, but he came back strong for the AMA Pro Motocross Championship with a top-10 result in the 250 category.

With more experience and a new KTM 250 SX-F FACTORY EDITION in his armoury Vohland will aim for the podium in his first full season of supercross.

“I only have three SX races under my belt, so I have a little bit of experience, but I think this extra time I’ve had on the bike during the off-season has really helped and I feel like a completely different rider than last year, I feel way ahead of where I was last year for this new season coming up.”

Ian Harrison, Red Bull KTM Factory Racing Team Manager: “The team has expanded this year with three 450 guys and Max on for his second year as a 250 rider, plus we have new bikes across the board. We’re excited about that.

“There’s been a lot of work and testing hours being put into the bikes here and in Austria, and we’ve made good progress with it on both sides. We’re looking forward to going racing in early January. We’ve got a good platform and the guys are happy to start the season.”

In regards to the team lineup, Harrison added, “The team dynamic is great right now. I think Aaron brings that real ‘loving-life’ style to the team, which is good. Cooper is looking happy with his new bike, he’s making good progress and I’m excited to see what he can do. I think Marvin is going to surprise us all. He’s had a good off-season and he did really well when he went to Europe to race the SX, so I think he’s going to be really good. With Max, we’re looking forward to seeing what he can do on the new bike with a clean bill of health this season. We’re excited to get things rolling here in a month.”