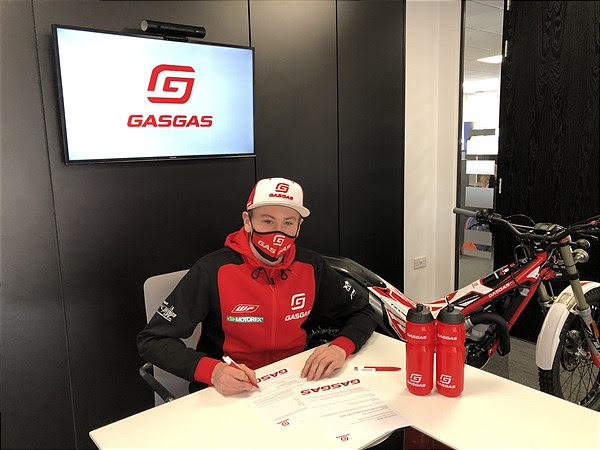 Jack Dance has fulfilled a dream by signing to GASGAS as a support rider to compete in the FIM Trial 125 world championship in 2021.

The talented 15 year old from West Sussex in England has been delivering title after title in the junior ranks at home, winning the British 125 title last year at a canter having won every round, so a move to international competition was always likely for 2021.

GASGAS Factory Racing Team Manager, Albert Cabestany, will keep a close eye on the progress of Dance at the five TrialGP events that will run Trial 125 rounds. With the the knowledge and advice of Cabestany’s 20 years in the sport Dance will surely make the necessary progres which will guide him to success.

“This deal is brilliant for me and I feel like I’ve been working towards this for years,” said Dance. “I’ve been riding a GASGAS for ten years, so to move to the Trial 125 world championship on a GASGAS is a great feeling and I’d like to thank everyone that’s helped me to get to where I am now, and especially to John Shirt for his continued support in 2021.

“Now is when the hard work really starts, and I hope to get out to Spain to train with Albert as soon as I can to get as much experience as possible before the season starts. Winning the Trial 125 title for GASGAS is obviously my main aim for 2021, and I’m also hoping to get some good results in the British championship to show what I’m capable of on GASGAS machinery.

The 2021 FIM Trial 125 world championship comprises six rounds at five venues, and will take Dance back to the UK with a round at Tong in July. The season starts in the Czech Republic in June, and as well as the trip to the UK, takes in rounds in Italy, Andorra in France. Dance will also compete in the ACU series in the UK supported by long term sponsor and GASGAS Dealer John Shirt Motorcycles.