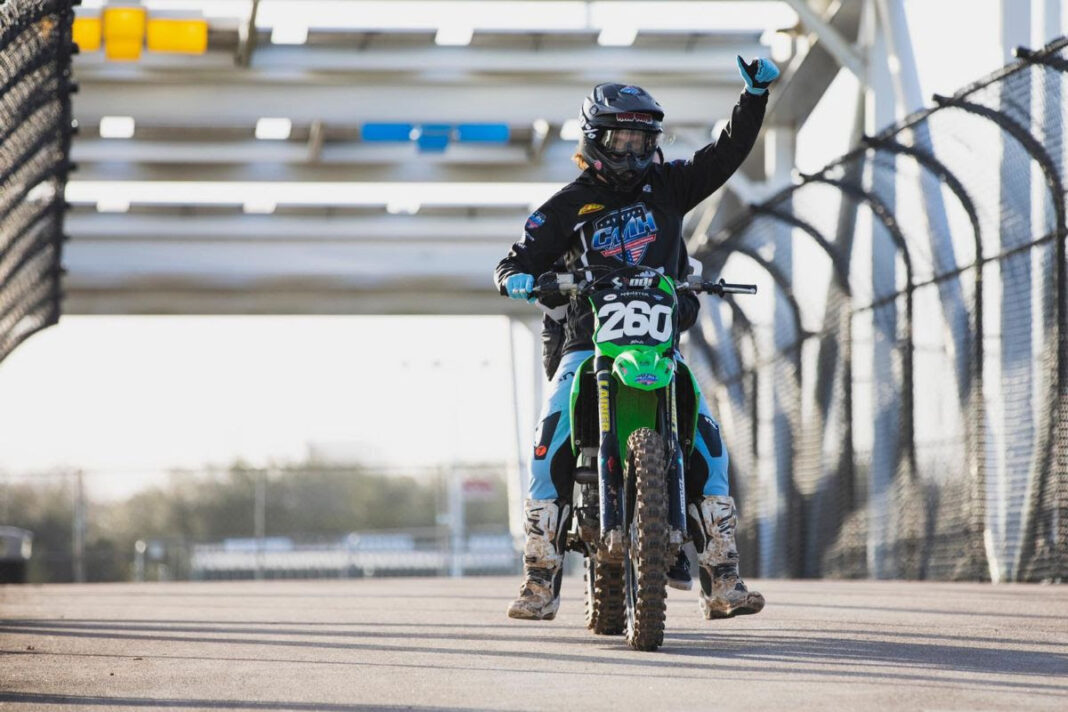 Rock it till Sundown team are hosting a brand new outdoor UK Supercross event, taking place in Salisbury in early August this year.

Following on from racing out in America for the AMA Monster Energy Supercross, Dylan Woodcock is the first name of Britain’s top riders to be confirmed to race. Steel Hawk Motorcycle Club are ready to introduce their ‘Airborne Gunner Summer Supercross’ at Cusses Gorse, Salisbury on Tuesday 3rd August.

“Racing the Monster Energy AMA Supercross is a dream come true,’ said Woodcock. “We need a regular Supercross series in the UK for us Brits, so more kids can get better at it and hopefully one day we’ll have more riders going to race the best in the world over in America and all the indoor events around the world.”

“Look at the amount of French riders who have gone out there, most of them grew up doing some Supercross in France. We need a series in the U.K from the young kids, all the way up. Hopefully this is the start of it. I’m right behind what the guys at Steel Hawk MCC are trying to do and will support them all the way. It’s exciting and different from all the motocross races we have going on in the UK.”

All the action will take place on a new, purpose built track by JB Track’s head honcho Justin Barclay, not much of a surprise as Justin runs the immaculate Cusses Gorse Circuit. The new Supercross track, which will cater for all abilities, will be built in the infield of the main motocross track and be floodlit for the inaugural event that will see the youth classes racing in the day time with the racing on into the night.

If you’re wondering why Tuesday night, well that’s because Steel Hawk Motorcycle Club have their successful ‘Rock it til Sundown’ Summer MX Classic the following day on the motocross circuit, effectively making a two day event of exciting off road racing with a full day’s programme of both Supercross and Motocross running back to back and some live music in between.

Steel Hawk MCC’s Jeff Perrett explained the idea behind the event. “We’ve been thinking about bringing outdoor Supercross back to the U.K for some time and we feel the time is right. Not only for trying to help drive a new audience to the joy of racing motocross bikes but also for us.”

“Let’s face it, it’s been a difficult year with a lot of doom and gloom and politics but we’re confident of returning to better days again and having a good time at the race track. There’s a lot of motocross races and championships every weekend, sometimes clashing dates, which we’re all aware of, so we decided to get something different off the ground, literally, and run it at a time that doesn’t clash without anything else.”

“Justin knows how to build a safe, but challenging track for all and that’s what we want. Our aim is to run a UK Supercross series in 2022 off the back of this inaugural event and make a accessible and sustainable championship from Auto riders up to the UK’s pro racers, and I’m confident we’ll be able to do that.”

“Putting it on the day before our ‘Rock it til Sundown’ motocross race was a no brainer as we’ll have about 320 riders rocking up to race in that, so it opens up the opportunity for riders to race both events if they wish. The only downside is that we can’t take more than 16 riders per class in our first ‘Airborne Gunner’ Supercross, obviously due to the nature of Supercross and the size of the track, but when we kick off the championship in 2022 we’ll make it open to more riders.”

“We’ve been chatting to a lot of the UK’s top indoor riders and will be announcing names for the Pro invitational class soon. Right now I’m happy to announce our first name on that list, Dylan Woodcock, will be lining up to race. A lot of British MX fans saw how well he done racing the AMA Monster Energy Supercross and he’s right behind the what we’re trying to achieve, so it’s great to have him signed up. Hopefully we’ll get more young British racers improving their skill set for Supercross and in a few years time we may have more Brits racing in AMA Supercross.”

“If that happened, we’d be pumped, because ultimately that’s the drive for getting UK Supercross back and running. I remember when they first built the Supercross track and Matchams and buzzing about it as a 13 year old. They had double jumps up there when they first built it and I remember being the first rider to take them on on my 85. Thankfully I cleared them and my confidence went through the roof after that. Racing those Wednesday night Supercrosses at Matchams was awesome and it’s that vibe for riders and fans we want to bring back. Just a good, chilled out evening in the Summer taking in the action, be it racing yourself or watching. We’re excited for it and hopefully a lot of other people will be too and we can build it into an integral part of the British off road motorcycling calendar.”

Oakland SX: Where to watch and A1 recap