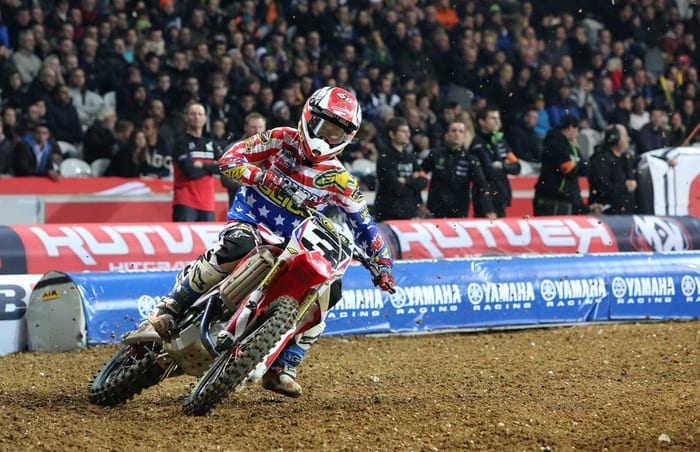 A new era for Europe’s biggest supercross race began with the shift from the aging Palais Omnisports arena in Bercy, Paris to the spacious two year old Stade Pierre Mauroy in Lille last weekend, and if Geico Honda’s Eli Tomac continues to appear and perform like he did in front of the 43,000 spectators in northern France then it could be the start of another dawn for the event.

Recovering from a head cold and celebrating his 22nd birthday on Friday, Tomac was not only the fastest and most confident racer in Lille but was faultless with his starts throughout the weekend. Despite benefitting from more floor space at the Pierre Mauroy the new layout was compact and without the famous tunnel runs that used to characterise the track at Bercy.

The soil was damp and soft and although this caused the course to cut up and become perilous in some sections it also brought its advantages. “The dirt is really good here and you can attack it and push hard everywhere; I like tracks like that where you can sprint and get a lot of traction,” assessed Tomac who ritually broke free from a pack that included the likes of Justin Barcia (2013 winner), Justin Brayton, Weston Peick, Malcolm Stewart, Josh Hill, Jordi Tixier (the MX2 World Champion wearing the number ‘1’ on his CLS Monster Energy Kawasaki for the first time), Dylan Ferrandis, Christophe Pourcel and Matt Moss.

Tomac was rampant on Saturday. The factory Honda man cleared the floor in every session: practice, the Heat, Superpole, ‘Americaine’ eliminator and pulled out a three second lead by the third lap of the main event. Sunday was a replay. Barcia came close to matching the CRF450R out of the gate in the very last outing but Tomac’s proficiency through the whoops and his outrageous wheeling-technique through the dragon-back meant he gained time with every circulation.

Barcia was working through a testing and learning process with the Yamaha in only his second appearance since signing with the JGR team and recovering from ankle surgery. His acclimatisation with the YZ450F is taking some time but perhaps is not surprising as the 22 year old has been Honda mounted since he was 11. “I got better every ride but I just didn’t have the speed that Eli had,” he said. “He is comfortable on the bike and it was easy to see it. I’m learning [about the Yamaha] but obviously I want to win, so it kinda sucked from that side. Otherwise it was good to learn more and we definitely improved. We had the motor apart a few times to change some stuff. It got better and better.”

Malcolm Stewart was third overall and in spite of some bizarre rumours that French Federation officials wanted him to clip his trademark dreadlocks for safety. The speed of Pourcel and Tixier were affected by crashes. The latter hurt his right knee and his motorcycle would not fire in the start gate of the last main event. Injuries to Moss, Brayton and Milko Potisek (a broken left leg apparently) meant that Paris-Lille proved to be costly outings.

Over in the SX2 (250cc) class and Bud Racing Kawasaki’s Maxime Desprey matched Tomac for his scorecard. The former GP racer (now focussed on European EMX250 for 2015) was a class apart from Thomas Do and the only non-French competitor in the division – Hitachi Construction Machinery Revo KTM UK’s Ben Watson – who shone in his first major supercross event to place third.

Tomac now heads over to Genova for the second event in the European ‘triple’ next week before the Geneva supercross closes the focus on the discipline and thoughts turn towards Anaheim on January 3.