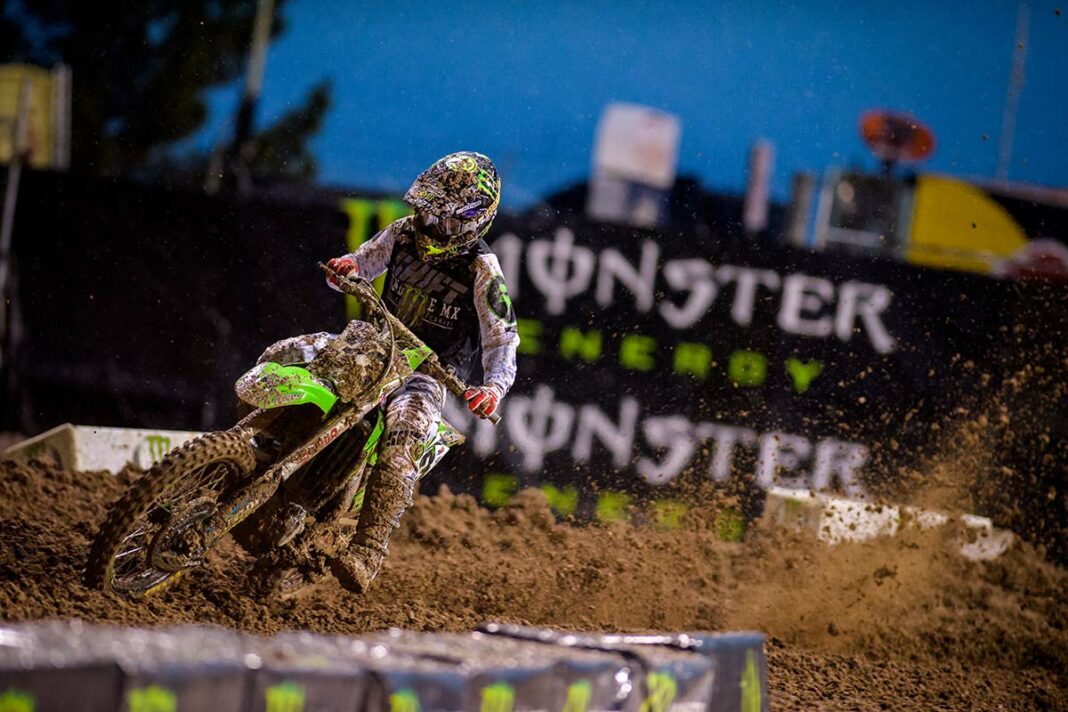 Supercross star Josh Grant is the latest high-profile announcement to join the star-studded line-up at this year’s AUS-X Open Sydney on November 11 and 12 at Qudos Bank Arena.

Grant will bang bars against some of the world’s best in the way of two-time world champion Chad Reed and world championship contender Jason Anderson along with Australia’s best Supercross riders.

Coming off the back of a podium finish at the last round of the AMA Supercross World Championship in Las Vegas the American is pumped to be heading down under and laying it all on the line against Australia’s best.

“I’m super pumped to be heading to the AUS-X Open in November and banging bars with Reedy, hombre [Jason Anderson] and the best talent Australia has to serve up,” Grant said. “I’ve been following the event since it started in 2015 and I just knew I had to be part of that action in Sydney.

“The track looks amazing and the fans look like they go absolutely nuts for Supercross in Australia so I can’t wait to get a piece in November.

“Both Jason [Anderson] and I were on the podium in Vegas for the last round of the AMA Supercross so I’m really gonna put it all on the line against him and Reedy and push hard for the AUS-X Open crown in 2017.”

Grant is a previous Supercross World Championship race winner claiming the coveted Anaheim 1 trophy for winning the opening round of the series.

Reed and Grant have a tight history in Supercross with Grant moving to Chad Reed-owned TwoTwo Motorsports in 2015, becoming Reed’s first ever AMA Supercross team rider and scoring a career best finish in the Supercross standings that year.

“Reedy and I have a great history in the sport. I have a lot of respect for him and know how fast he can be, especially in front of his home crowd,” Grant added.

“He’s won both AUS-X Open crowns to date but someone needs to knock the #22 off its perch and I plan to be that guy come November!”

Grant then moved to the factory Monster Energy Kawasaki team in 2016 where he’s continued to shine as one of the world’s premiere Supercross riders.

The AUS-X Open is the only event of its kind in Australia, where Supercross and Freestyle Motocross gladiators from around the globe come to compete for supremacy on Australian soil. In 2016, the event attracted over 26,000 fans across the two days, and collectively reached millions of eyeballs worldwide courtesy of a comprehensive social media and television broadcast.

The sport of Supercross continues to rise rapidly towards mainstream interest, as millennials opt for the high energy, high stake and unpredictable nature of action sports.

Each Saturday night of the AUS-X Open sold out in 2015 and 2016, and last year’s Sunday event almost reached capacity, meaning fans are urged to purchase tickets now to avoid disappointment.