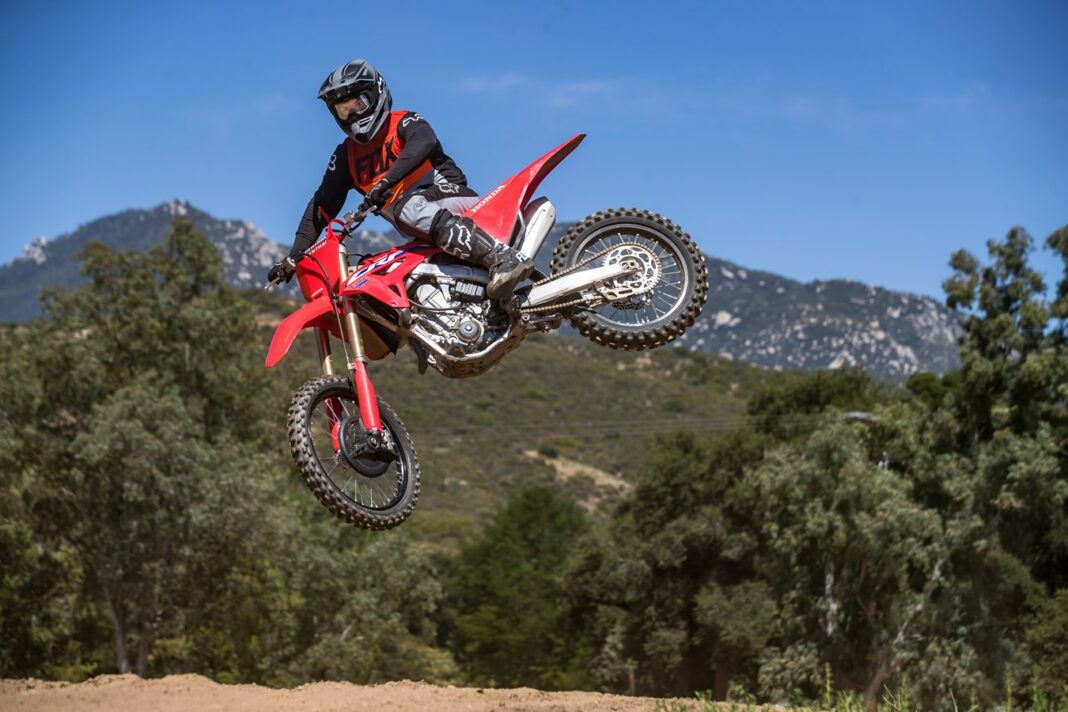 The CRF has been given smoother drivability from new ECU settings, plus a re-valve for the Showa suspension to improve damping balance between front and rear. The frame remains unchanged, and is the exact same frame used on the CRF450RW piloted to back-to-back MXGP World Championships by Tim Gajser in 2019 and 2020.

The aim for the 2022 evolution is to deliver noticeably improved ‘hold up’ – raising the compression damping ride height of the stroke both front and rear in use – optimising balance between the front and rear of the machine.

The Showa 49mm USD coil spring AF2 fork is based on the ‘factory’ unit supplied to MX race teams in the Japanese championship. Through the 21YM update the fork received 5mm more stroke, to 310mm, and increased rigidity for its axle clamps.

For this year, the low-speed shim-stack has been re-valved to generate firmer settings for both compression and rebound damping. Oil volume reduces 8cc to 380cc; there are now 13 adjustment positions (rather than 15) for rebound with 15 for compression, as before.

A complete re-valve of the Showa MKE AF2 rear shock’s low-mid- and high-speed shim stack delivers a firmer overall setting for compression damping. There are now 11 adjustment positions for rebound (from the 8 of the previous iteration) and 6 for high and low-speed compression (from 12). Oil volume increases 1cc to 422cc.

2022 sees the 449.7cc four-valve Unicam engine unchanged, except for updated ECU mapping further promotes linear throttle control enhancing the boost that it received in in 2021,

Those changes were very significant. An increase (up to 0.6kW) in peak power above 5,000rpm – accompanied by a stronger low-rpm torque feel – was the result of an extra 1.8L volume (to 4.1L) on the ‘clean’ side. The injector angle, too went from 30° to 60°, spraying fuel all the way back to the butterfly to improve intake efficiency, cooling of the charge and all-important throttle feel. The decompression system was also new: its counterweight moved from the right of the camshaft to the left, giving more stable operation at low rpm with increased stall-resistance.

The biggest change was to the twin exhaust ports: like the CBR1000RR-R Fireblade their exit became oval rather than round in shape for improved efficiency. The downpipe was also tucked in 74mm closer to the centre line while the single muffler featured twin resonators to reduce noise while boosting power.

Drawn directly from Gajser’s bike was the 8-plate hydraulic clutch. This gives outstanding control and feel at the lever as well as delivering consistent lever clearance under arduous riding conditions. Slippage was also reduced by 85 per cent at peak power.

Podcast: 2pro1slow XL Lagares and Herlings in the UK