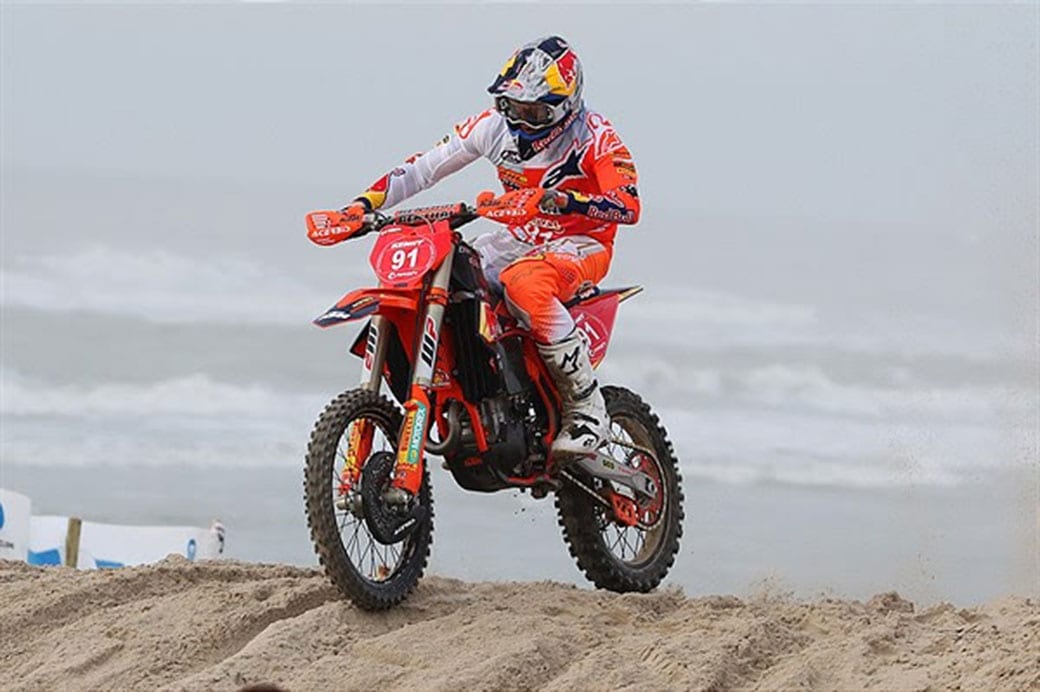 Red Bull KTM Factory Racing’s Nathan Watson has successfully defended his French Beach Race Championship title with a hard-fought podium result at Enduropale du Touquet.
With the infamous Enduropale du Touquet marking the seventh and final round of the CFS: Championnat de France des Sables, all eyes were on defending champion Nathan Watson to see if he could repeat his 2019 winning result.
As the 1,200 competitors lined up for the beginning of the gruelling three-hour event, Watson knew the importance of making a fast start and then pushing hard during the early stages of race. A little too keen to get his race started, the Brit was later deemed to have jumped the start, picking up a 60-second stop-and-go penalty.
Unaware of what was to come, Nathan exited the first corner just outside the top 10 and set about making ground on the leaders. Battling his way up to fifth during the first five laps, an efficient fuel stop after the first hour of racing moved him into third. Favouring the rougher conditions in the latter stages of race, Watson reached as high as second with just over one hour remaining.
With organisers then handing him the penalty, Nathan’s charge was ended and he ultimately lost his chance of victory. Dropping back down the leaderboard to fourth, he eventually battled his way back into a podium position and finished third at the checkered flag.
“It’s been a hard season, but to come away with back-to-back French Beach Race titles is amazing,” said Watson. “It’s a credit to the team, they worked so hard to get this result.
It’s me out on the track but it really is a team effort, for sure.
“Naturally, I wanted to win the championship with victory here today, but the cards didn’t fall my way.
“Between the nature of the track and then the stop-and-go penalty, things were against me. I felt like the track was maybe too fast for me and I needed more corners to slow the early pace down. I hold my hands up about the start, I simply got my timing a little wrong with the bungy being released. I went a little too early.
“One minute was a tough penalty, especially as I never gained anything and exited the first corner in 12th. But it is what it is. Overall, I’m pleased with the season as a whole. I think that myself and Camille showed we’re two of the strongest guys out there and our bikes never missed a beat.
“Thanks to KTM and the team, we’ll celebrate this title for sure!”
Fellow Brit Todd Kellett finished in fifth place and celebrated a second place in the championship.
Results – CFS: Championnat de France des Sables 2019/20 – Round 7: Enduropale du Touquet
1. Milko Potisek (FRA), Yamaha, 15 laps, 3:06:44.033
2. Jeremy Van Horebeek (BEL), Honda, 3:10:10.404 +3:26
3. Nathan Watson (GBR), KTM, 3:12:26.582 +5:42
4. Camille Chapeliere (FRA), KTM, 3:12:49.154 +6:05
5. Todd Kellett (GBR), Yamaha, 3:14:39.632 +7:55
Championship Standings – CFS: Championnat de France des Sables 2019/20 (Round 7)
1. Nathan Watson (GBR) KTM, 845 points
2. Todd Kellett (GBR), Yamaha, 755 pts
3. Camille Chapeliere (FRA), KTM, 671 pts
4. Richard Fura (FRA), Yamaha, 558 pts
5. Jeremy Van Horebeek (BEL), Honda, 552 pts
[more-from heading=”More Enduro” category=”enduro”]

Weston Beach Race: Bolt out due to Enduro date clash