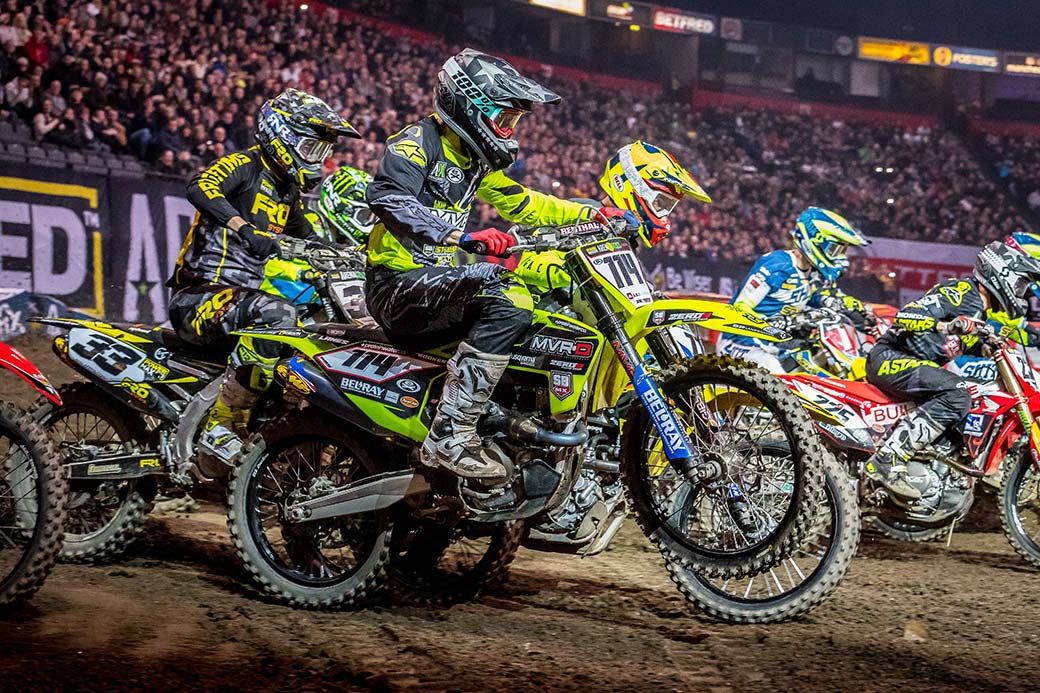 It’s only a matter of days now until the 2019 Arenacross Tour bursts into action with a heady line-up of international racers chomping at the bit to, not just win a hefty pot of cash but to also earn the accolade of lifting the highly-revered 2019 Arenacross Pro trophy.

It’s a stellar cast of top-notch racers – possibly the best mix of international racers ever to grace the Arenacross start-line.

A new race format sees a complete upturn for 2019, which is set to entice some mad and bad racing. For the first time ever in Arenacross, 450s will meet 250s head on. Riders in each class will get two main events apiece. The top six Pros and Lites –
– will be seeded through to the AX Super Main Final. The winners of the ‘fans fave’ Head-to-Head and the winner of the Last Chance Qualifier, will complete the final line-up.

That intriguing race format has clearly given some canny Pros food for thought, with the likes of reigning AX Pro champ Cedric Soubeyras switching to the Pro Lites.

By his own admission, Soubeyras isn’t great off the line and so this slight gain could suit him very well, however, he has many top-notch world-class supercross racers keeping him company in the Lites.

2018 sixth-placed AX Pro Adrien Escoffier, who cleaned up in the SX2 class of the recent 2018 French SX Tour, together with a fired-up and rejuvenated Martin Barr as well as Pro Lites 2018 victor Joe Clayton. Julien Lebeau, arguably one of the best of the current crop of Lites riders in Europe, with both German and French Supercross championship titles under his belt, should keep him honest.

Elsewhere in the 2019 Arenacross Pro camp – Team Green Kawasaki is fielding a strong team with an unpredictable force joining the Pros. Top ranking Frenchman Greg Aranda has been well up the leader board in European supercross this year and battled right to the very end in the SX1 class of the 2018 French SX Tour last weekend. That championship went to the very last lap of the final race, with Soubeyras claiming the crown by a slim four-point margin. Clayton is Team Green’s Lites contender and AX regular Jack Brunell – 10th in 2018 will run in the Pro class.

2018 fourth-ranking Fabien Izoird joins eighth-placed Hugo Basaula, in the Pros, with Scooter Webster, in the Lites, in the Shocktech Kawasaki team. Former Pro champ Izoird and Basaula are aggressive front runners and, with just the top six seeded through to the Super Final, they’ll take no prisoners when that AX gate drops.

Barr will fly a solo flag in the Crescent Yamaha camp, but that won’t faze the Ballymena-man. He last contested the Arenacross series in 2013, when the Brits ruled the Pro class. He finished fourth behind Adam Chatfield, Nev Bradshaw and Brunell and reckons that, with his winter supercross training under his belt, he’ll be out of the gate and way out in front.

Dave Thorpe’s Buildbase Honda team sees American Austin Root out on a CRF450R. The 23-year-old from South Carolina showed heaps of promise in his early years, cleaning up in the schoolboy ranks with consecutive AMA Ultra Series championship wins. In recent years, he’s been there, or there abouts, and then showed his form just last month when he came over to Europe and smashed the 24MX Supercross Superfinal at Eicma in Milan.

Under the watchful eye of Thorpe and teamed up with the handy Escoffier in the Pro Lites, Root could be something of a dark horse. And, there’s a more on the Buildbase Honda front as the 2013 Arenacross Pro champ Chatfield – fondly referred to as the Ginger Ninja – returns to the fold for 2019.

Ringing the changes for 2019 is a new Suzuki team; Castrol Suzuki MBC. This exciting new-to-AX team will field American hotshot Cole Martinez from Arizona, Nick Schmidt from Seattle and Portuguese Diogo Graca. AMA SX top-15 contender Martinez was crowned King of Stuttgart in November, taking the scalps of Aranada and Soubeyras in the process. He won the Supercross European Championship in Poland in 2017. Graca is an eight-time Portuguese motocross and supercross champion. 28-year-old Nick Schmidt was the 2017 ADAC SX champ and he has a pretty keen scorecard.

Team FRO Systems is supporting the largest team of riders and with the recently crowned French Supercross champ, Soubeyras, moving to a 250cc, it’s paved the way for Nique Thury to contest the Pro 450cc class. He finished 11th in AX last year but, given that he only rode three of the seven rounds, the German SX champ cannot be discounted. His Pro class team-mate is fans’ fave Ashley Greedy, who has tasted off-season success and is training heavily for 2019.

Brit Matt Bayliss returns to the arena in the Pro class with Wooldridge Demolition and he’ll be joined by the aforementioned 21-year-old Frenchman Lebeau. Bayliss finished 17th last year and can beat the best of them on his day.

A strong Northern Ireland representation will see privateer Glenn McCormick on his Unique FitOut Husqvarna line up on the Pro Lites grid with Barr.

The 2019 AX Pro classes are fit to burst with podium-hungry, super-talented world-leading racers ready to go out and rip up the stadium. It’s going to be tense, and the stage is set for it to go the wire.

If there is one certainty, then it’s that Arenacross is as predictable as it is unpredictable and, with the added twist of Pitstop Betting and the inclusion of e-gaming from Monster Energy Supercross – The Official Video Game 2, 2019 is set to be something of a belter.

Arenacross Tour tickets are on sale now, with prices from just £12 for a child visitor on Friday evenings, and substantial discounts available for two-night tickets. Arena doors will open at 6pm, with the opening ceremony getting underway at 7.30pm.