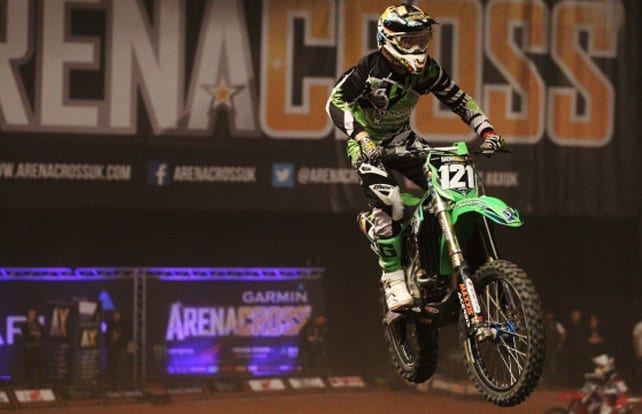 After a week in the West Country, Pendrich Kawasaki trekked up the M5 and across the M42 to Birmingham’s LG Arena at the NEC for round three of the 2014 Garmin Arenacross Tour, where a hard-pack track, toasty paddock facilities, and a full house made the weekend much more enjoyable for everyone.

The morning practice sessions got off to a strong start, and soon segued into qualifying where the team’s Big Wheel 85cc rider Lee Perfect qualified in fifth, while the two Pro riders Bryan Mackenzie and Ed Allingham qualified in 16th and 21st overall.

The evening event saw Perfect collect a sixth place with a dinged ankle that prevented him from hucking the big triples throughout the evening. Was he disappointed with the result? Yes, but it was still 13 points in the kitty that will come in handy in the next half of the tour.

“Started off in the morning and the track was real, real hard pack, and I was just trying to find a groove,” said Lee Perfect.

“I went into first qualifying, cased one of the big triples and jarred my ankle just a little bit. Came in, rested up, went back out for second qualifying and did the same thing again, just on a different jump, so went into the main event with a sore ankle. I had a poor start, and had just not a really good result!”

As for the two Pro boys, Mackenzie definitely had a groove going and collected a fifth and sixth in his heats to squeak through into the main event, while Allingham had to brave the melée that is the Last Chance Qualifier. He proved himself though by grabbing a good position in the first corner for a fourth throughout the race, but alas, it was not enough for those precious two last spots, and he had to watch from the sidelines. In the Main, Mackenzie tried a different strategy. While it kept him out of the first turn mess, it also prevented him from progressing much, ending the evening in 11th for an 11th in the championship at the halfway point.

“First off, it’s really nice not to have to go to the LCQ. The heat races were steady, a fifth and sixth, last week I got the same but didn’t make it into the main but tonight I transferred straight through and missed the brawl in the LCQ which was a great start,” says Bryan Mackenzie.

“I knew from my start position that I was going to have a bad gate, so I came up with a plan to hang back on the start and then nip up the inside on the first turn, but a few other guys had the same idea, so I never quite got the start I wanted. It wasn’t the race I wanted, it was hard work to do anything, other than following the guy in front and hope for a mistake, and 11th is points in the bag, but it’s not the points I wanted, so I move on to next week.”

“The weekend started off not too good, a bit of crashing and whatnot. I was starting to get it together better in the mains, I was getting terrible starts, but in the LCQ I turned up the inside and just sat in fourth, so hopefully I’m getting a better start next week. I’m riding well enough, so hopefully it’ll come together better,” said Ed Allingham.

He added: “He’s doing this on a 250, and the obviously more powerful 450s are besting him every time, but progression and making the main I was happy with. Ed Allingham performed reasonably well, picked up some points for us in the LCQ finishing fourth, which is a great progression for him. Lee was a bit unfortunate this weekend, we tried a new bike this weekend and the power is a bit much for him on that small track. So I’m a wee bit disappointed for Lee but nonetheless still positive going into the next round. We can still pick up more points and look toward the final race and maybe get on the podium.”

Next up for the team is another week of riding and preparing for the next round at Liverpool’s Echo Arena on Sunday afternoon.