Graeme Irwin is making a shock return to the dirt for a one-off indoor race at the infamous Belfast round of The Arenacross Tour.

“The timing of the Belfast Arenacross suited me with it being in the off-season of my superbike campaign,” said the former British Motocross Champion turned road racer.

“I’ve won every championship in the UK but Arenacross, that’s motivation.”

“I jokingly sent Graeme a message to think about coming out of retirement for a couple of nights in the winter, but what I didn’t expect was for him to message me straight back saying that he thought it was a great idea” commented tour promoter Matt Bates.

“Graeme, like all of the Irwin family are racers through and through where I believe this sends a message to the current crop of top-class professional British Motocross Championship riders that don’t currently compete in Arenacross as it either interferes with pre season testing or doesn’t quite fit with their outdoor plans – Graeme is a racer, he races bikes, he’s a champion and is a role model to every young rider in the sport.”

Joining Irwin him will be MX veteran Martin Barr, who himself has had a successful season having represented his country for the 15th consecutive time at the Motocross of Nations as well as taking the MX Nationals MX2 title.

Last year was his first time returning to the Arenacross Tour since 2013 and the Ballyclare rider will be keen to make his AX bid one the fans can get behind.

“As always there will be tough competition at Arenacross, with plenty of riders that are full-time SX riders who have already started their season. It’s going to be tough…but a challenge I can’t wait for,” commented Barr who will be riding in the AX Pro Lite 250 Championship. Amongst the AX Pro line up will be another well-known rider, Stuart Edmonds who will be looking to make his mark on Arenacross following some unfortunate injuries in his previous seasons.

“I have been interested in the Arenacross since my last outing a few years ago in Belfast. It’s something I have been trying to organise each year but due to injury and other things I wasn’t able to. Thanks to my sponsors we were able to sort a really good package so I couldn’t turn the opportunity down” explains Edmonds. 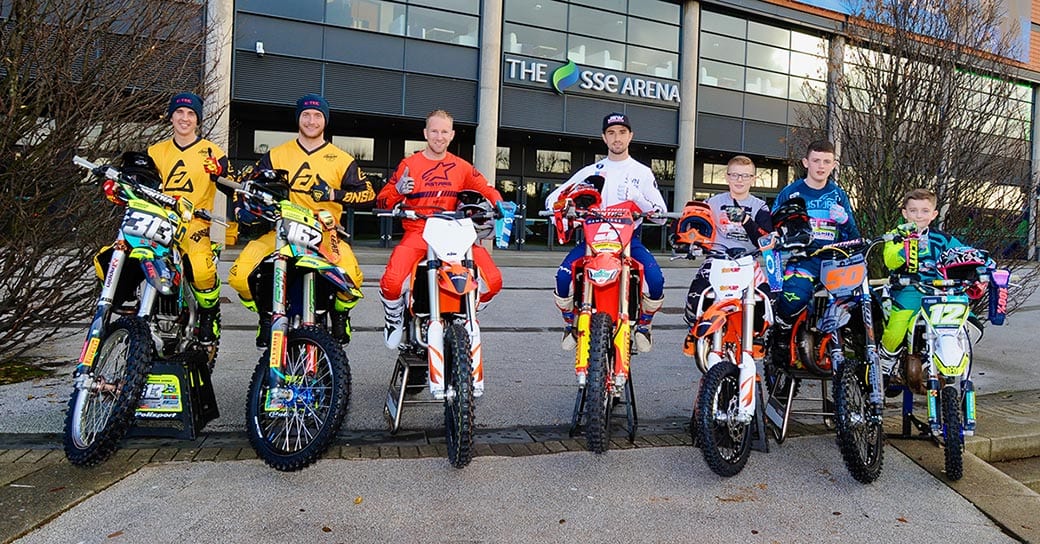 Irish racers will feature heavily in the Youth ranks too, in the Supermini Cup both Charley Irwin and Lewis Spratt will go head to head. Charley will be making a comeback to Arenacross having raced the series since he was seven years old with numerous podium finishes. “This will be my first-time racing in the Big Wheel 85 class at AX, the competition will be tough but I’m hoping to get in the top three!” said Irwin.

Fellow competitor Lewis Spratt is also no stranger to the lights and lasers of Arenacross having debuted last year in the 65cc class. “I’ve been to AX with my family since I was 3 and always said I would love to do it. This year is my first year on the 85cc so a big learning year for me but I’m up for the challenge” comments Spratt. 65cc Cup newcomer, Jordan Kinsella will be debuting at the Arenacross Tour following his first season at the British 65cc Championship.

Now in its second year, the All Ireland Cup will feature at the opening two rounds in Belfast. The all Irish class will feature twelve riders, pitting wheel-against-wheel in what is anticipated to be a no-holds-barred fight to the chequered flag. An overall champion will be crowned on Saturday night. Amongst them will be Jordan Keogh who will be the first rider to take on the All Ireland class and the AX Pro Lite 250 class in his bid to show his talent! “I don’t have any expectations just want to get out there and give it my best. On tighter course, with spectators closer to the action and able to view all angles I can’t wait to get out there” explains Keogh.

The 2020 Arenacross Tour heads back to The SSE Arena, Belfast on January 17th and 18th, joining Resorts World Arena, Birmingham and The SSE Arena, Wembley in what’s set to be a stunning winter showdown from Europe’s leading action-sports show. Each round promises seat grabbing entertainment from some of the world’s best indoor Motocross racers and Freestyle MX stars from across the globe.