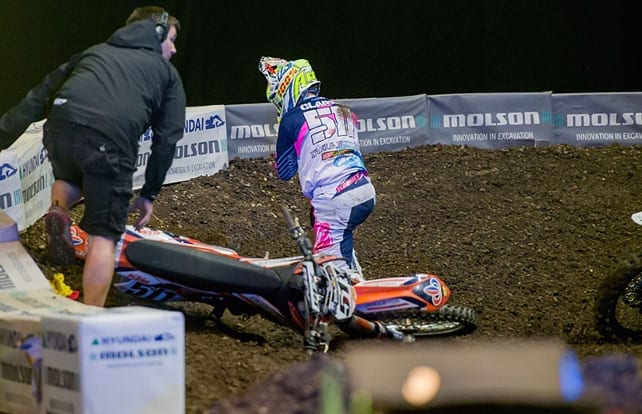 For round six of the Garmin Arenacross UK tour the Dyer and Butler KTM team headed to the Motorpoint Arena in Sheffield. The Sheffield arena has long been a home for high profile motorcycle events and Saturday night was to be no different.

After his victory in Newcastle the previous week, Steven Clarke was feeling confident going into the sixth round. During the daytime practice and qualifying sessions Clarke settled in quickly on one of the most technically demanding tracks of the tour and posted a number of fast times.

Jamie Law also returned to action after missing most of last week’s event following a crash. At the end of the qualifying session Clarke was second fastest and looking strong for the night show, while Law was in 18th place.

The evening saw Clarke and Law line up together in the second heat. As the gate dropped Clarke got a superb jump on the rest of the field to lead the pack going into the first turn.

Then as Clarke charged down the whoops section on the opening lap the KTM rider made a mistake and went down hard. Unfortunately that was to be the end of Clarke’s night as he suffered a potential wrist injury and travelled straight home to get it checked out at his local hospital.

The hospital diagnosed that Clarke had most likely dislocated his wrist which had popped back in on his way to hospital. Clarkey will now miss the Hawkstone International but is confident of making a return for the final round of Arenacross in London on March 1.

Meanwhile back in the race Law was stuck in the middle of the pack when he too made a mistake in the whoops section and went down heavily and retired from the rest of the evening’s races.

At the end of the evening, Clarke sat fifth in the points standing, just one point ahead of Neville Bradshaw. With one round of the series left, Clarke remains the leading British rider and is in prime position to collect the keys to a new Honda car.

Jamie Law continues to sit just outside the top 10 in 13th place, while team Dyer and Butler KTM hold a solid fifth place in the team championship, just three points behind third place.

With both riders now sat on the sidelines with injuries team manager Paul Hobbs summarised that: “Tonight hasn’t been a very good night for the team, losing both rider within two laps was never the plan.

“Fortunately Jamie should be okay in the long run and just needs to rest his elbow and wrist injuries before we start the outdoor events. We just hope that both riders will be fit and healthy very soon and ready for the outdoors”

“I came into tonight feeling sore and carrying an injury from last weekend,” said Jamie Law. “I was hoping to stay safe but I got caught out by the difficulty of the track layout and went down hard. I’ve hurt my elbow and now my wrist and I think this will be the last of round of the Arenacross tour for me as I rest for the outdoors”

A disappointed Steven Clarke said: “I’m gutted about what happened last night. During the day I was producing some good lap times and finished second fastest.

“Going into the night show I was feeling good and lined up on pole for my heat race. From there I made a mega jump and then it all went wrong in the whoops section. I felt sick as I left the track thinking that a wrist injury now would be terrible.

We drove straight to my local hospital and had an X-ray on my wrist, it seems like it was slightly dislocated at some point but it is all back in place now. In the coming days I will get it checked again and get some therapy and work on getting it strong again”