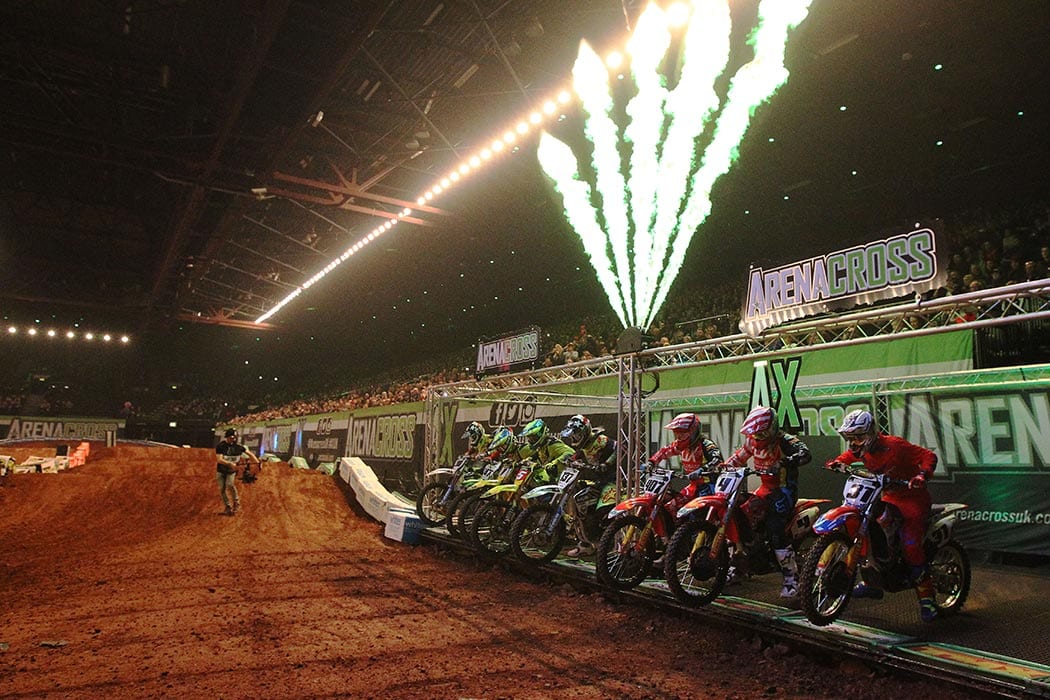 The 2018 Arenacross Tour is now just weeks away from flying into some of the UK’s biggest and best venues, bringing with it some of the hottest indoor race action with riders from all over the world.

After that, the lights, lasers and pyro will be packed up and shipped off to continue the fun in Belgium and Germany for the first ever AX World Tour. The return of The Arenacross Tour in 2018 brings with it a whole host of home-grown and international rider talent and team involvement.

This year with over £150,000 worth of prize money up for grabs for riders and more than £63,000 available for teams, the best of the best are gunning to get an invite indoors.  Arenacross can now announce the teams and riders who have made the cut and will be joining the AX gals, guys and dirt as they put on the hottest Saturday night family entertainment over the winter.

First up the returning Pro Champ has yet to stray from the team that has provided him with the tools to bag himself the ‘threepeat’.  Thomas Ramette returns alongside team-mate Cyrille Coulon with his SR75 Suzuki team, with the aim of making three Pro Championship wins in a row, into four.

The 2017 Team Champions Race FX are back, having announced that they will once again, be bringing the Italian Angelo Pellegrini with them. Pellegrini actually took second place overall in the 2017 Pro Champs just in-front of former team-mate Cedric Soubeyras.

However this year, the ‘Soub’ will be riding for Team FRO Systems alongside the ‘badboy of AX’ Ashley Greedy, so the rider taking the second seat on the Race FX team is still yet to be revealed.

Fans of the Frenchies will be pleased to hear that the 2014 AX Tour Champ Fabien Iziord will be back for 2018 and is set to head up the Buildbase Honda team (once again, second rider to be announced shortly).

Doing it for the Brits is Team Green Kawasaki who slot straight back into Tour proceedings with the all English team Adam Chatfield and Jack Brunell.  You may well be surprised to see the ginger ninja Chatfield straying from his trusty Honda, but word on the street says that he’s already been spotted on a green machine and is proving a dab hand!

For the first time, MVRD Husqvarna are fronting a two-pronged attack on the Tour, entering two teams in the form of Frenchman Adrien Escoffier and German Nique Thury (who will be looking forward to getting on to home-soil when the Tour hits the ESPRIT Arena in Dusseldorf on March 10 for the World Finals), alongside Jordan Booker and Harri Kullas.

In what is the most British line-up ever to be seen in an Arenacross Tour, there’s another all Brit team as Wooldridge Demolition Honda sees former team rider Matt Bayliss, flanked for 2018 by Jake Millward who rode the Tour three years ago in the Pro Lites class.

Following on a theme and fans will be pleased to see that former AX rider Elliott Banks-Browne is back for 2018, fronting Geartec Husqvarna.  After a pretty gnarly incident a few years back, EBB is looking forward to getting back in the AX mix. And finally, it’s the return of the 2-stroke!

Taking on the PRO class as the only team running 2-stokes on the 2018 AX Tour, GL12 KTM takes to the start gate with James Dunn and Dutchman Mike Kras. There’s also set to be a JK Yamaha team and one other but as soon we get details of these, you’ll be the first to know!