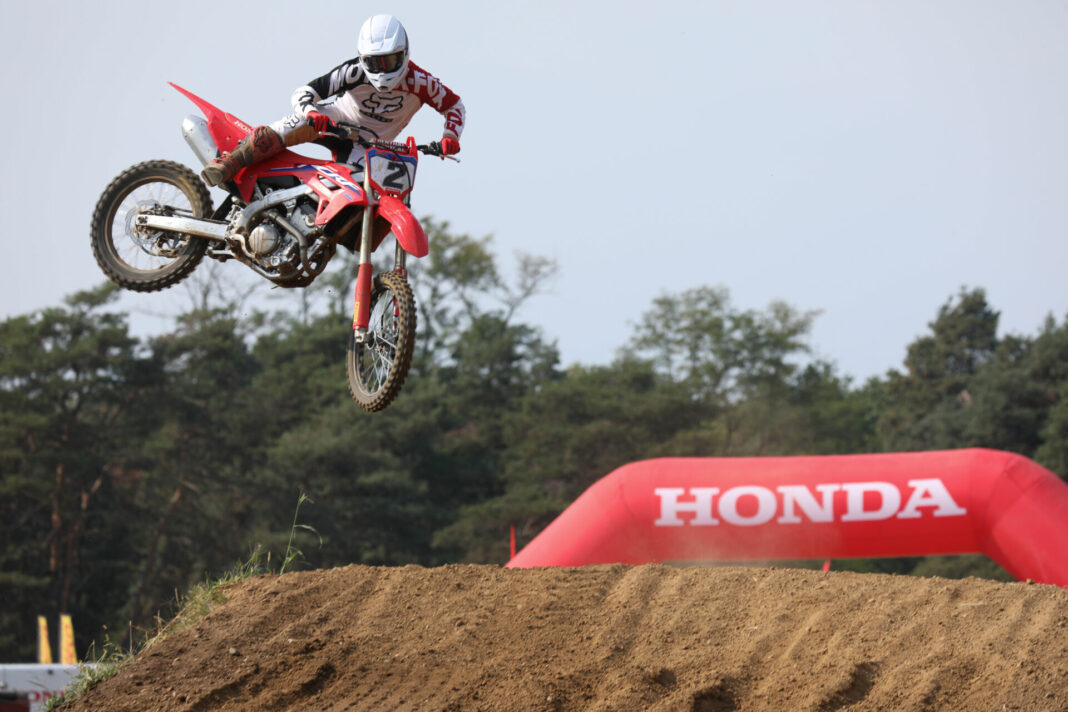 Hot on the heels of Jett Lawrence taking victory in the Lucas Oils Pro MX Championship, Honda launched the 2022 CRF250R and as ex-British Champion Graeme Irwin had nothing much on, we packed him in a bag and sent him to Malpensa in Italy to see what all the fuss was about…

The bike has a fresh look, like it’s bigger sibling the CRF450R. Honda has taken an approach to make this model lighter slimmer and faster by making big changes to the engine, chassis and exhaust but the proof will be in the riding, so here are Irwin’s thinkings:

At first I thought this thing’s slow as shit, but that’s because I have been riding a 450 for the last ten years. Seriously, it was such a fun bike to ride and I felt right at home on it straightaway.

It’s so easy to throw around, and is so well balanced. It’s the kind of a bike that you can just put anywhere on the track. We ran through a couple of sessions not changing anything on the bike, and focusing on how the chassis felt.

The suspension is really well balanced, It was quite strange because we played about with the clickers and I went a little bit stiffer on the fork and stiffer on the rear, just for my weight. The biggest thing was also the balance of the bike.

In the past, a lot of the manufacturers somehow manage to make an unbalanced bike. It was nice to get on a bike that I think you could pretty just leave with not a lot, if any changes being made.

I’d say I did four clicks and it was a lot better. I went for another three and it became a bit too harsh, so I came back on it. I could go race the bike the way it was with the suspension.

I think it would be interesting to see what the bike is like in this trim as well, because of where the engine lacks in the top. I think obviously once a team puts the likes of a pipe on it, it will be interesting to see. The bike has so much more torque than the previous model.

It’s easier to get more top end, if you can afford to lose a little bit of torque. Whereas with the old bike, you couldn’t take away really any torque because the bike had too little. Whereas now I think it has fifteen per cent more torque.

This bike is more competitive, that’s for sure. Obviously, KTM is the market leader so Honda had to do something about it. I think it was joint with Yamaha as the heaviest. So, they had to change and it’s now more ready to race from Japan than probably ever before.

Normally you have to spend a little money on it to be good, whereas I don’t think this bike needs it. I would put a pipe for a little bit more on the top end to be able to pull the gears for longer but that’s it.

The bike has enough power on the bottom that you could use third gear at most corners, which obviously stops you having to go up and down the gearbox and such. The clutch is really strong as well and that’s something that Honda was really weak with before.

I think that I was pretty hard on the clutch and on the revs on the test. I purposely wanted to test the durability of the clutch because that was weak in previous models. The starting laps for me personally, I was really a big fan of maps one and two. But the one with the lowest RPM was more for a novice rider – you couldn’t even do a wheelie with it.

The engine has a lot of bottom to mid power which gets you to the top-end quicker. Throttle response to the back wheel was also very nice, it was very easy to steer the bike on the gas from the rear and wheeling bumps and hopping braking bumps. The track we tested at was on the side of a hill, a big horse-power track and I’m confident that a stock CRF250R could be competitive at British level.

Overall the CRF250R is very impressive, the bike was very well balanced and gave me a lot of confidence in racing into the turns and over jumps. The engine does lack a little top end but this is made up by the large amount of torque, making it a bike that likes to pull gears and not be over rev’d. Perfect for the amatuer rider and pro alike wanting to get stuck into some racing.

You can also watch a video review from Graeme below: