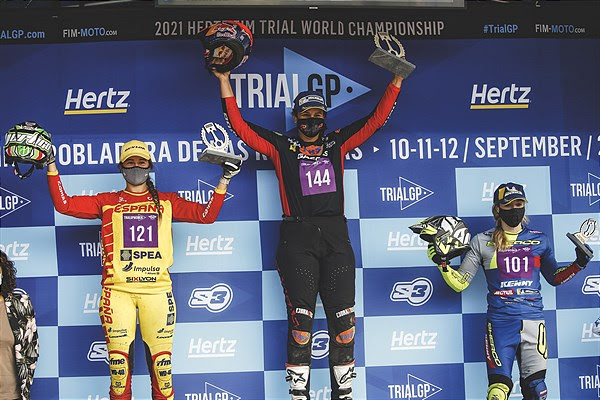 Laia Sanz has delivered one of her most important performances in this year’s TrialGP, at the penultimate round of the championship at Pobladura de las Regueras.

Needing to stay as close as possible to Women’s class leader Emma Bristow to ensure a chance of winning the title at next weekend’s final round in Portugal, Laia did exactly what she needed to do by winning day one and finishing as a close runner-up on day two at the Trial GP of Spain. With one day of competition remaining, Laia sits just one point behind Multiple champion Bristow.

Claiming her second win of the series to date, Laia also saw defending class champion Emma Bristow finish in third position, very much putting Laia back in the championship hunt with her British rival.

“It was a really good weekend for me,’ said Laia.

“The first day went perfectly as I managed to get the win, a much needed victory to keep my championship winning hopes alive. Today, day two, it was a pity because I could have won again.”

“If I had I would have made things a lot easier for myself in Portugal next weekend, but I made some silly mistakes and finished second. The second lap was not easy for me, apart from making some mistakes I struggled a lot with my physical condition as I was feeling tired.”

“It’s a bit disappointing because I did not fight as I wanted to. But I still have a strong chance of getting the championship and that was the goal before competing here in Spain. Everything is to play for next weekend.”