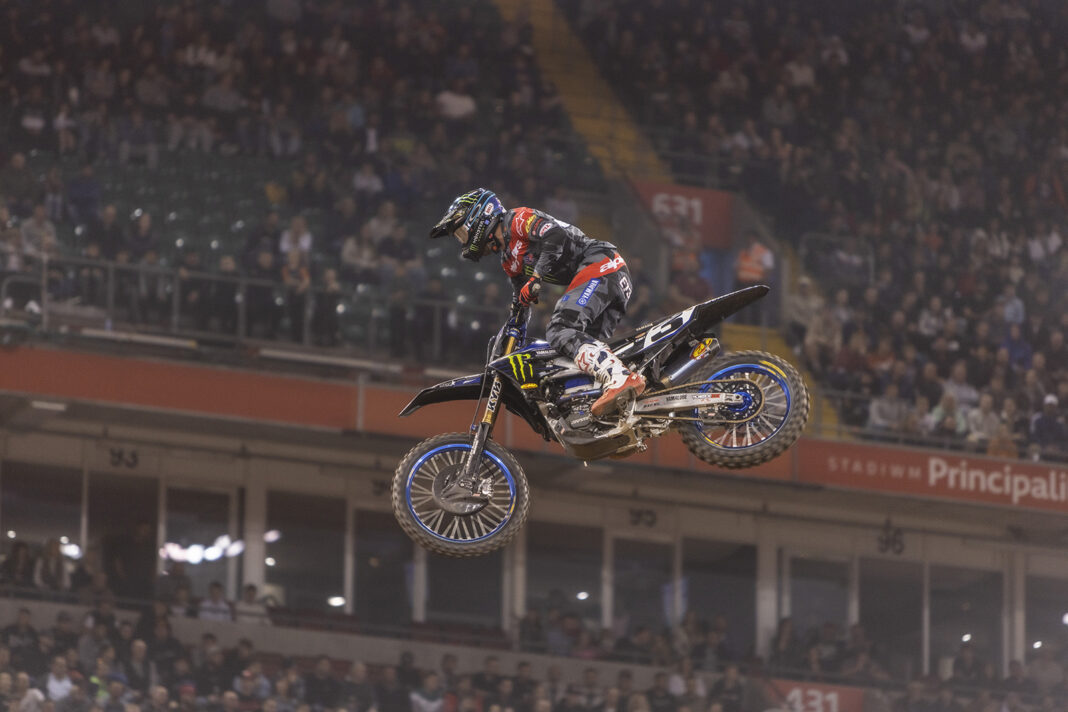 Yamaha’s Tomac – a wildcard this weekend – was third quickest in qualifying, behind Rick Ware Racing’s Joey Savatgy and pace-setter Roczen. And it was Roczen who was shaping up to be the man to beat; winning his heat and setting the fastest lap in the night’s superpole session with a huge quad in the rhythm section wowing fans.

Unfortunately for him, things began to unravel for the German in the GP race main events. Leading the first of three he was caught out by the changing track conditions, crashing and handing the lead to Tomac. He recovered to finish third, behind fellow Honda pilot Vince Friese on the MotoConcepts machine.

It was a Tomac, Roczen one-two in the second of the three GP races, with the pair having to fight through the field, before Tomac made it three from three in the third to cap a perfect evening. While Savatgy was second in the final race, the MotoConcepts outfit bagged two more GP race top-three finishes, with Friese and teammate Justin Brayton taking a third apiece.

With all the points tallied up, Tomac was the clear winner, with Roczen and Friese completing the night’s podium.

“To be honest I started off a little bit slow and Ken rode really well in that heat race and in the superpole I just never manned up for the quad, to be straight up,” said Tomac, who won’t contest any other rounds.

“That thing was a big nope I was going to stay with the triple-single and it ended up working out. All three mains were a little bit different; obviously I got the gift from Ken in the first and then had to make a couple of passes in the second but I think the most technical part of the night was the dirt: it was tough, very hard pack.

“I actually almost fell in the third, near the mechanics in that last left-hander. But overall I just enjoyed the whole schedule and the racing. Coming in here I thought that the eight and 12-lap races were going to be a little short but that wasn’t easy and it obviously showcased some good racing and I had a lot of fun doing it.

“The World Supercross Championship is real: it was a real supercross and nothing was second level with it, it was all first class and it was great to see the big crowd here. It was really cool to see the stadium filled up. To be honest I was looking at it thinking this is a big stadium but I think we filled it pretty well.”

Reed out of retirement to contest World Supercross